Processing in Space. Processing AI in space. Having a space-grade chip requires a lot of commitment and preparation for the radiation shielding, but AMD’s Xilinx managed to ship its first space-ready Versal AI cores.

The first space-grade Versal™ adaptive SoC is the XQR Versal™ AI Core XQRVC1902 device that enables full radiation tolerance, accelerated AI inferencing, and high-bandwidth signal processing performance for satellite and space applications. The completion of Class B qualification, derived from the US military specification MIL-PRF-38535, allows the devices to begin shipping in early 2023.

The radiation-tolerant XQR Versal AI Core XQRVC1902 devices represent a major leap forward in enabling sophisticated on-board data processing and AI inferencing applications in space. Until now, highly complex AI applications could only be performed with custom-designed ASICs, which are prohibitively expensive for most space programs.

Xilinx, now part of AMD, has already cooperated with space agencies. Mars Rover Perseverance is already running the top-notch 20 nm Space-Grade Radiation Tolerant (RT) Kintex UltraScale XQRKU060FPGA. Versal is a step function as it delivers significantly more performance and flexibility, as it is meant to launch in products still in the future. Mars rover left the earth in 2020.

In contrast to ASICs, the XQR Versal adaptive SoC supports reprogramming during development and after deployment, including in-flight in the harsh radiation environment of space. This permits satellite operators to change processing algorithms after launching a satellite, allowing for previously unavailable flexibility in remote sensing and communications applications. 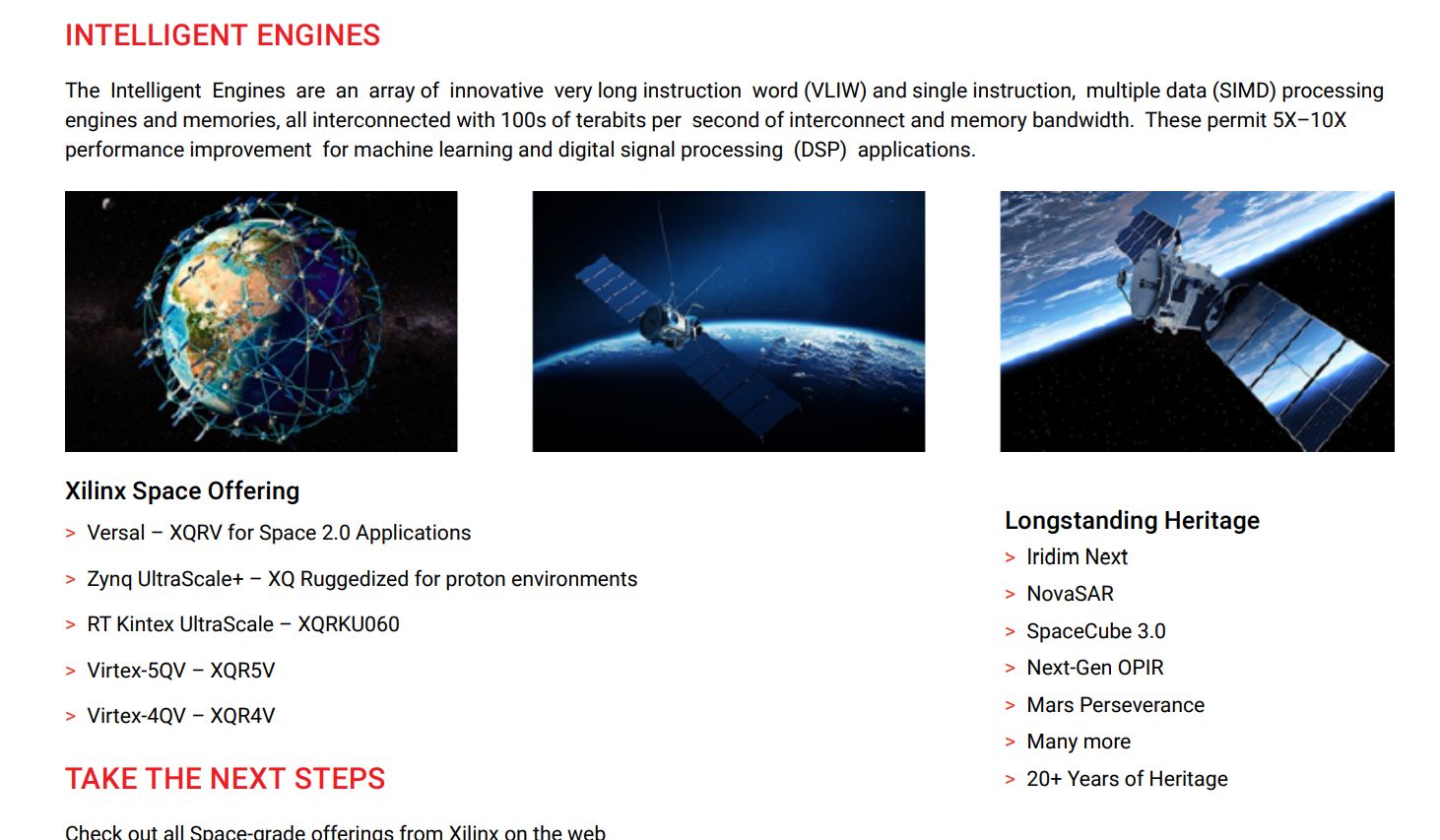 The ability to do updates after deployment can prolong the life and usefulness of a satellite for the years to come and save millions of dollars on deploying a replacement satellite. It is impossible to bring the satellite down to earth to upgrade the board or firmware. Doing the hardware FPGA part update remotely is the only option and is currently available via AMD Versal AI adaptive.

The radiation tolerance of the XQR Versal has been tested by AMD and independent organizations. It has been determined to be capable of supporting missions from low-earth orbit to geosynchronous earth orbit and beyond.

Developers can produce designs for XQR Versal devices using the AMD Xilinx Vivado™ tool suite and Vitis™ AI software platform from a variety of developer tools and industry-standard frameworks, including RTL, C and C++, Matlab, Caffe, TensorFlow, PyTorch and others.

“The Class B qualification marks a significant milestone in the introduction of advanced programmable solutions for space applications,” said Minal Sawant, senior director of Aerospace and Defense Vertical Market, AMD. “We have prioritized an accelerated schedule for the Versal adaptive SoC Class B qualification, all while ensuring a thorough and rigorous approach to the testing and analysis necessary to qualify devices for use in space. We are excited to start scheduling customers’ orders for flight-grade Versal devices.”

The AMD Class B qualification and manufacturing test flow is based on the US Department of Defense MIL-PRF-38535 Class B specification for qualification and testing of monolithic integrated circuits. It has been adapted for the advanced organic packaging AMD is using for XQR Versal space-grade products.