Computing and calculation are a tough job on the ground, not to mention in the Space, satellites, and mars rowers where one faces radiation, limited Space, and power constraints. Xilinx just announced a top of the line 20 nm Space-Grade Radiation Tolerant (RT) Kintex UltraScale XQRKU060FPGA that will offer 10X compute performance and reduce development time to launch from 5 to 6 to 2 to 3 years.

Mars Rover, most satellite, communication payloads, earth observation payloads, and space missions will be the key markets for this top of the notch product. To some trained eyes, 20nm might not seem advanced enough, but considering that the last Radiation Tolerant product was at 65nm and was launch more than half a decade ago, XQRKU060FPGA is quite impressive. We had a wonderful time chatting with Minal Sawant, Space System Architect at Xilinx, and the conversation was a speed learning curve about the chips in Space. She gets to work with just about anyone who wants to launch a satellite or all generations past and future of mars rowers. 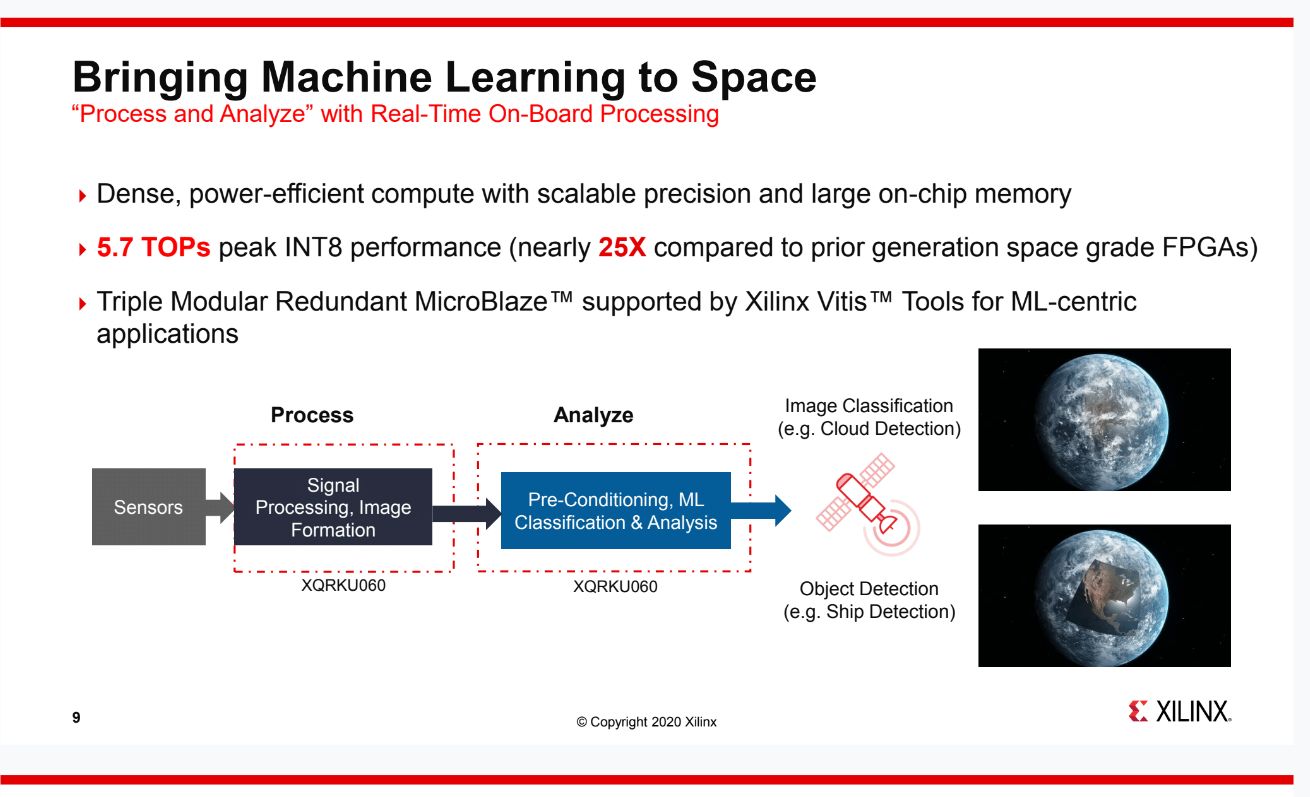 As you can imagine, data links from the satellites are limited and expensive resources. Xilinx learned that they could use machine learning and artificial intelligence to analyze the images on satellite and discard blurred images or images of clouds and save the downlink and sending them to the base station. Another use case could be looking for the ship in the sea, and discard all the images of beautiful oceans that contain no ships.

Combination of Deep learning processing unit of Kintex UltraScale XQRKU060FPGA wit Vitis AI software stack, using CNNs and MLPs (multilayer perceptron ) networks, gets the job done. No other ASIC or competing programable solution can do this.

RT Kintex powered Grace, MER, and TerraSAR. MER is better known as Mars Exploration Rover, and it was launched in 2003 and landed in 2012. The longevity of the product and plays a crucial role, and this is why Xilinx landed all Space rovers in the past and the future. Kintex solution powers Curiosity rover, OSIRIS Rex and Iridium NEXT satellites and will be the past of Perseverance MARS2020, EcoMARS (new Rover set to launch in 2022) and NextGen Satellite Payloads

Communication in Space are downlink bandwidth limited and require low latency and high bandwidth. The new Kintex also offers machine learning in orbit and can be reprogrammed and repurposed. In space exploration, reuse of platform can save millions of dollars as a single satellite launch can cost 100s of millions of dollars. Machine learning found its Space in orbit as it is better to make sense of data in the Space and save the bandwidth than clogging all the downlink. The space industry is looking for a flexible system architecture that can be changed on the fly with reliable components, radiation tolerant and size, weight, and power-efficient.

A tough task to address, but 20nm RT Kintex UltraScale FPGA seams to be doing the job. It is a true unlimited on-orbit reconfigurable solution. Yes, this means that it can be programmed in Space. It offers more than 10X DSP compute increase for processing-intensive algorithms and analytics, and it is full radiation-tolerant across all orbits. The machine learning ecosystem enables high-performance edge inference in Space.

The platform features high bandwidth compute capability, including 2760 DSP slices with multi-precision fixed and floating-point modes, 32 high-speed SERDES 12.5 Gbps, and 400 Gbps aggregated bandwidth. The radiation tolerance across all orbits TID>Krad/si, SEL>80MeV-cm2/mg. One of the unique features is a robust 40×44 mm Ceramic column Grid away packaging that is helping to shield the chip from the space radiation.  The chip has to withstand Space radiation, extreme temperature changes, rocket launch, and extreme G-forces that can bend some traditional packages, but ceramics can withstand that. It is all designed towards Reliability for Space. You cannot merely stop a mission that takes 10 to 15 years and return the space ship to do the additional repairs and update the chip. 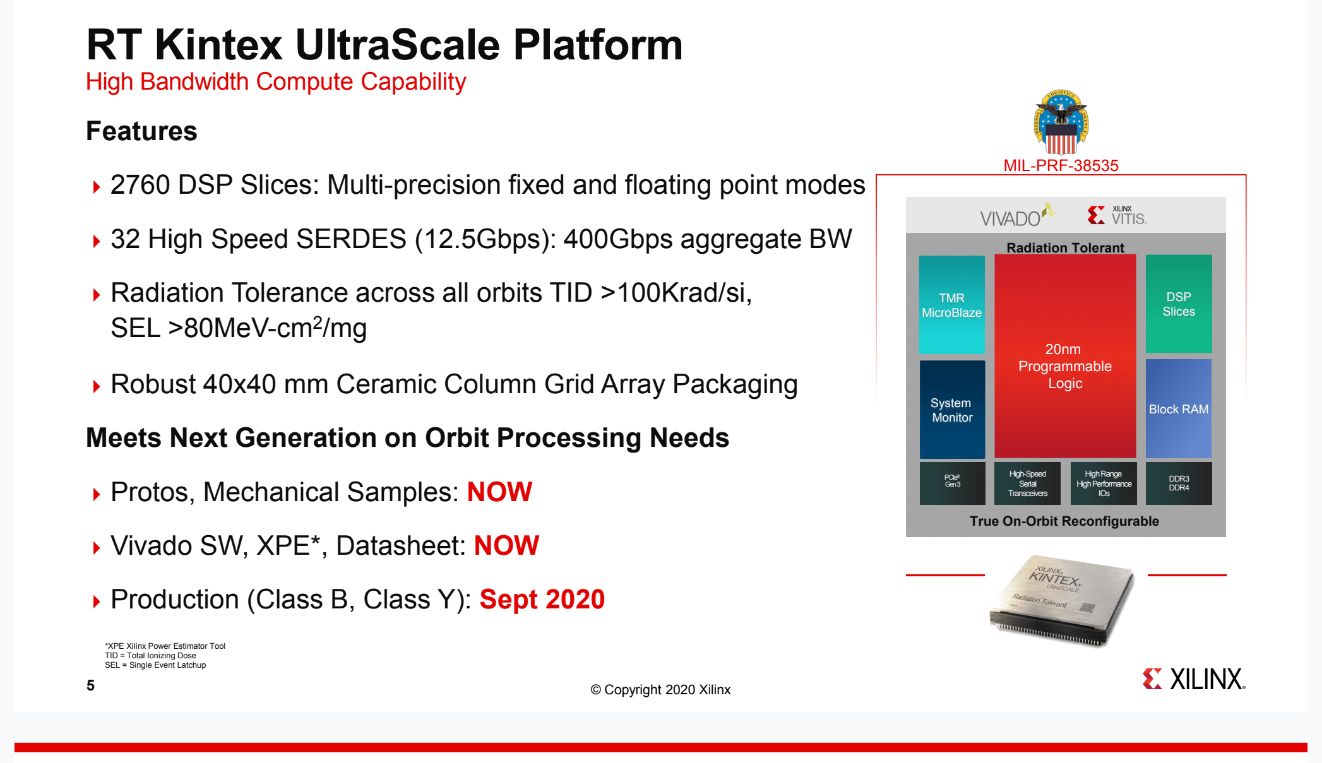 Prototypes and mechanical samples are available now, Vivado software and Xilinx Power Estimator tool including the datasheet are available now. At the same time, the production of both Class B and Class Y is expected in September 2020.

RT Kintex UltraScale Platform offers true unlimited On-Orbit Reconfiguration, and an engineer can fix a bug or reprogram/repurpose the FPGA in the future. ASIC chips don’t have this flexibility, and they are “baked, “ and one cannot reprogram or repurpose the hardened algorithms.

Developers can use existing frameworks including Keras, TensorFlow or PyTorch, FINN, hls4ml, or Vitis AI compiles, and Neural networks inference acceleration is dynamically loadable. Once Vitis AI gets enabled, DPUs will be able to use NN inference acceleration, too, but this is planned for the future update.

The solution offers Low-latency, high-throughput performance with customizable pre/post-processing for CNNs & MLPs with multi-precision network support optimized for INT8 and below.

One great example is the telecommunication satellite that can be updated in the future. Operators can change and adapt frequency plans, channelization bandwidths, and routing uplinks to specific downlink.

Reconfiguration of the satellite can be done by storage of multiple bitstreams in the Non Volatile memory, onboard computer, or even the ground station. 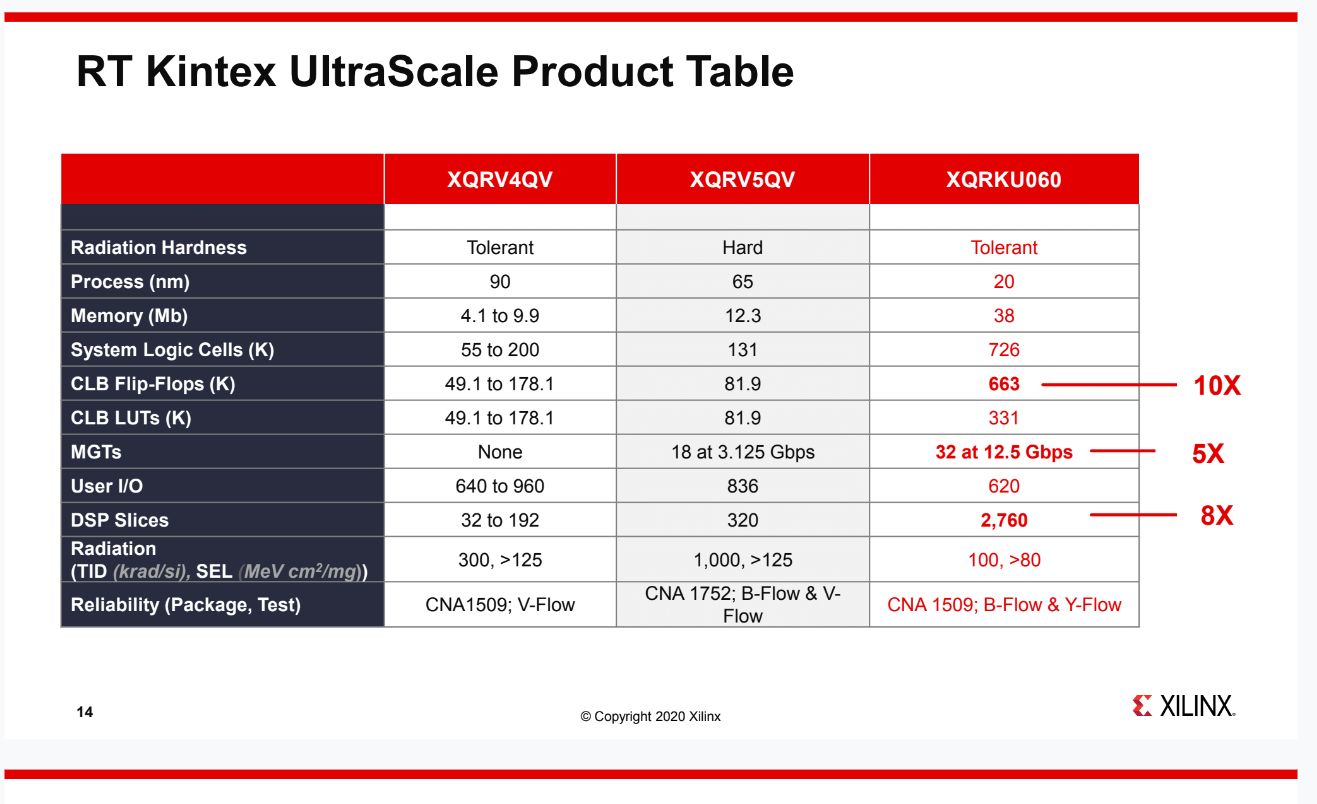 Xilinx 20 nm Space-Grade Radiation Tolerant (RT) Kintex UltraScale XQRKU060FPGA will make the future satellites smarted. Satellites will be able to be reprogrammed and repurposed. They will do part of the edge computing on the vessel itself without need to send 66 percent of the cloud pictures when a satellite is tracking ships or helping map companies to map the world.

The next-generation European Space agency EXOMars (Rover) will also use Xilinx technology launching in 2022, and it will help it make sense of the data that it collects on Mars, and it will even help it send it back. Simply amazing. 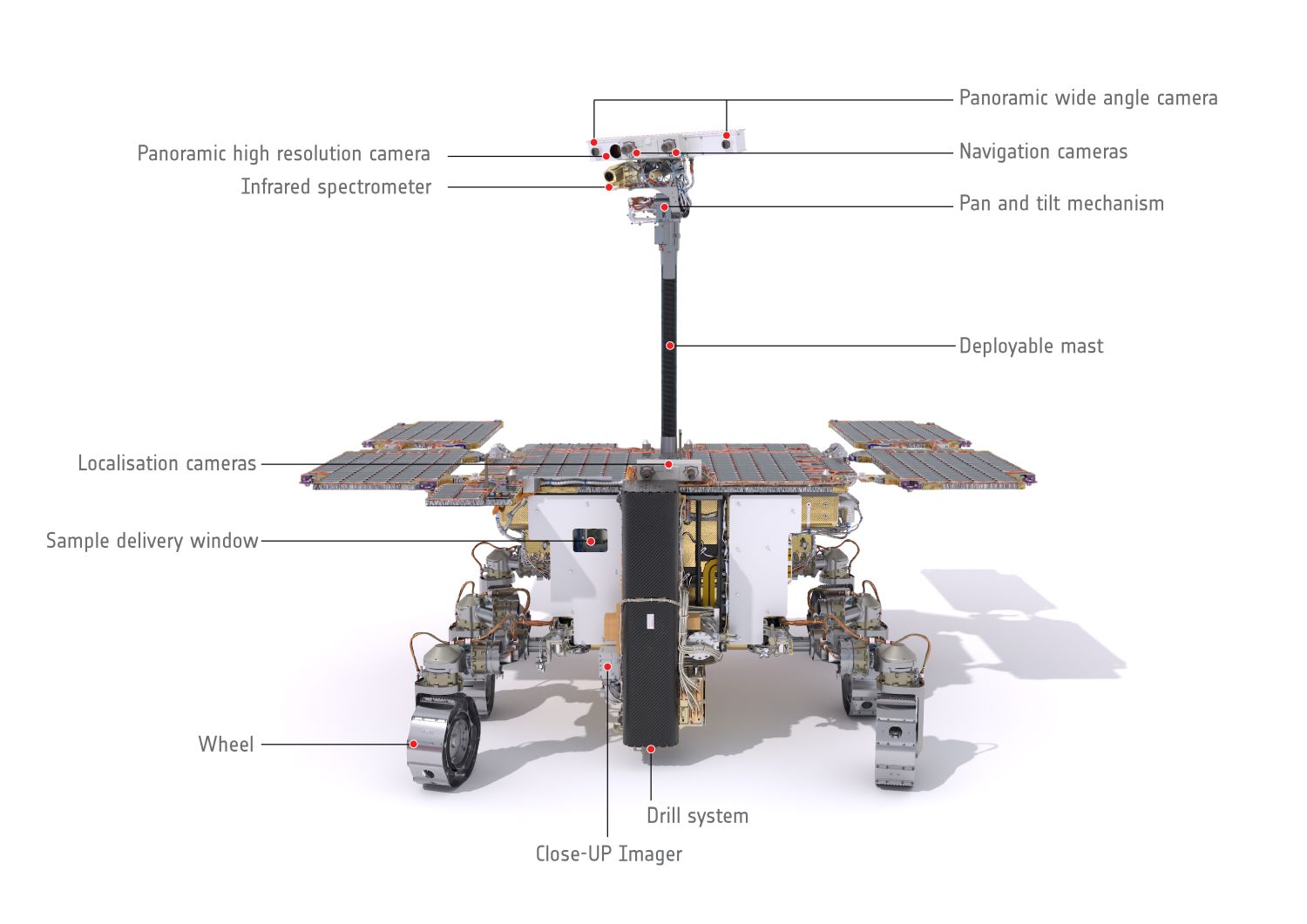